Tailings Thickeners are extremely important to the efficient operation of Concentrators and Coal Preparation Plants etc. Tailings Thickeners are used to settle out suspended solids and return the clear water back to the process. If the return water to the process has high suspended solids loading, then it can totally affect the performance of the plant.

In most cases, to settle the Thickener under these conditions, it requires the process plant to reduce production, which will decrease the water flow to the Thickener and in turn, increase the retention rate within the Thickener. This hydraulically allows a greater settling out of solids, which in turn will allow the process plant to once again increase production. Pressure transmitters (Bed Pressure transmitters) are affected by density change and therefore cannot be used for control purposes. Rake Torque from the scraper, also work on total load and are affected by density and therefore cannot be used to control bed level. The displacement float sticks and suffers from build-up. The Sonar Acoustic transmitter can be calibrated to work with two different densities. We can track the Compact Bed Level to control the underflow pump. We can also track a lighter density within the interface column that when affected by a settling problem with in the Thickener will rise hydraulically upwards towards the launders. By tracking the two densities in a PLC, or DCS, we can determine when settling problems are starting to occur within the Thickener. We can also determine when flocculant dosing has failed. Setting problems occur within the Thickener when Ore bodies are changed in the process. One of the biggest problems to an efficiently operating Tailings Thickener is the lack of automatically dosing the flocculant, to compensate for changing settling conditions. 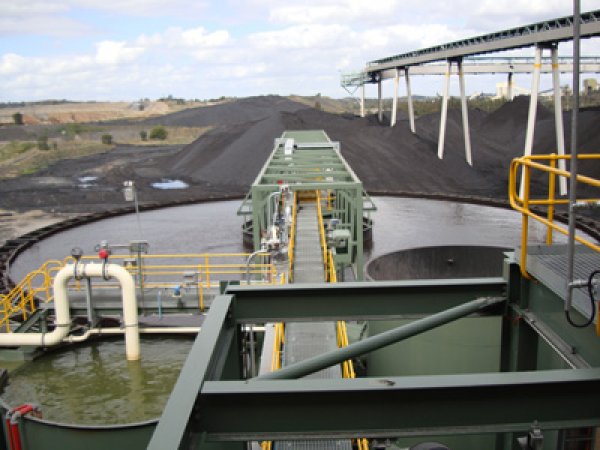